Adrift in the North Atlantic ocean is a rugged, windswept archipelago of 18 Islands that are so dramatic in their beauty, they seem to come straight out of the pages of a Jules Verne novel. Waterfalls plunge from huge, jagged cliffs straight into the frothing swells of the ocean. Lakes sit atop sheer cliffs, surrounded by puffins and giant seagulls. Lush green fjords cut through the craggy islands. This is a country where sheep outnumber people almost two to one, where you can find the Prime Minister’s number in the phone book and where only 3 traffic lights exist! The population, descended from Viking blood, mainly live in small towns scattered between valleys and around the coast, made up of hobbit like brightly coloured wooden houses, often with roofs covered in grass. The country is a fairytale of unfathomable beauty, and although a small niche of adventurous hikers and wildlife lovers travel there, the Faroe Islands are mostly unknown.

The Midnight Sun is a phenomenon in the extremes of the Northern and Southern Hemisphere during the peak of summer. The sun sets so late (in some areas it doesn’t set at all) that it never gets dark. Sunset and Sunrise merge and you end up with the most beautiful and dramatic light that lasts for hours – a photographers dream. The below is a town called Gasadalur on the Western tip of Vagar Islands in the Faroe Islands. There aren’t many places in the world you can watch huge waterfalls plunge directly into the ocean, especially with a back drop like this. 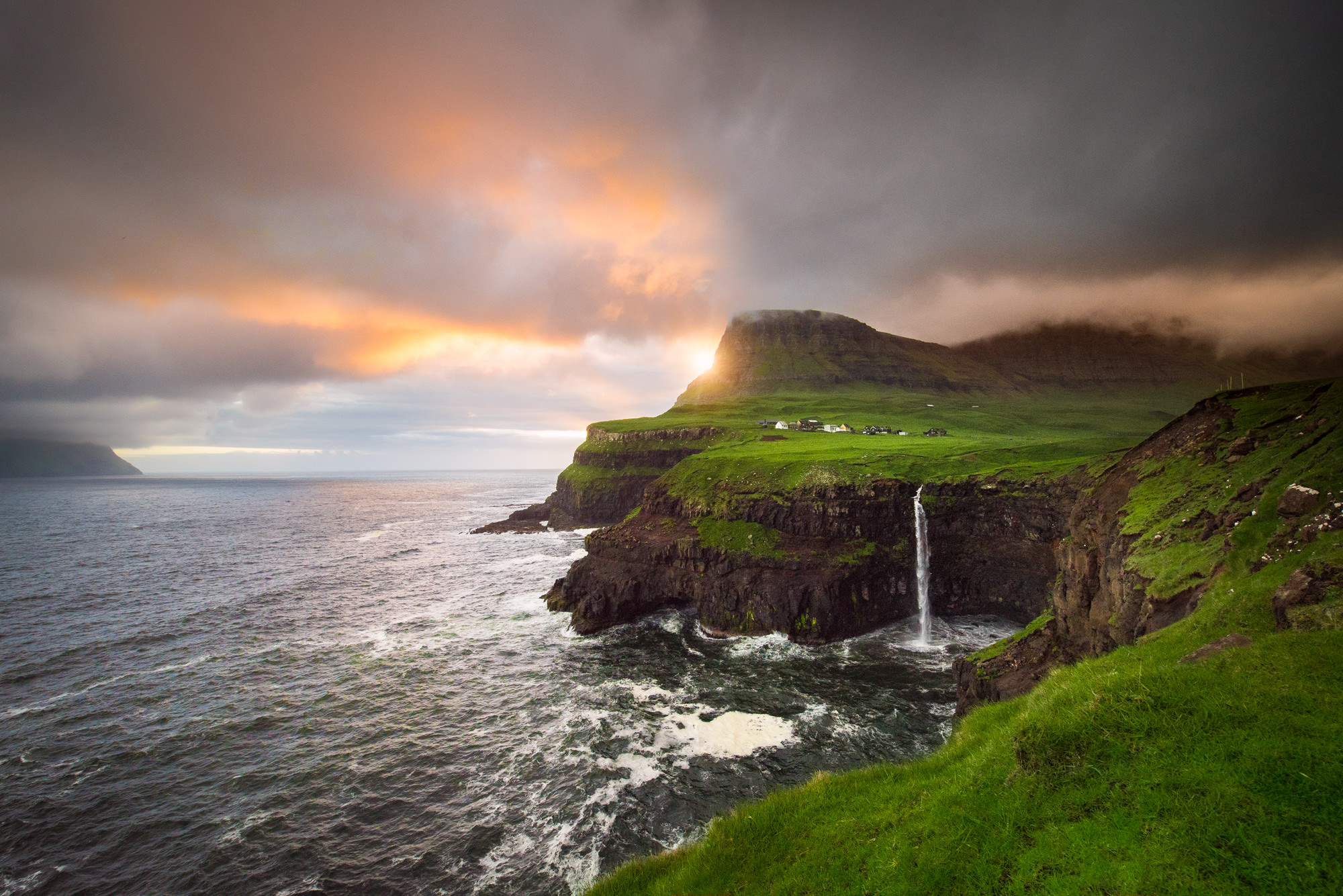 One of the most classic views in the Faroes, Lake Sørvágsvatn sits atop the giant cliff face on Vagar, I’ve never seen anywhere like it. You can park you car on the main road between the airport and Sandavágur and hike around an hour along the lake around to this view. One of the best things in the Faroe Islands, is you can still go to the most famous spots and be there by yourself, even in peak season. There are very few tourists, no big signs, no paths or picnic benches, you find your own way, it feels refreshing and real. 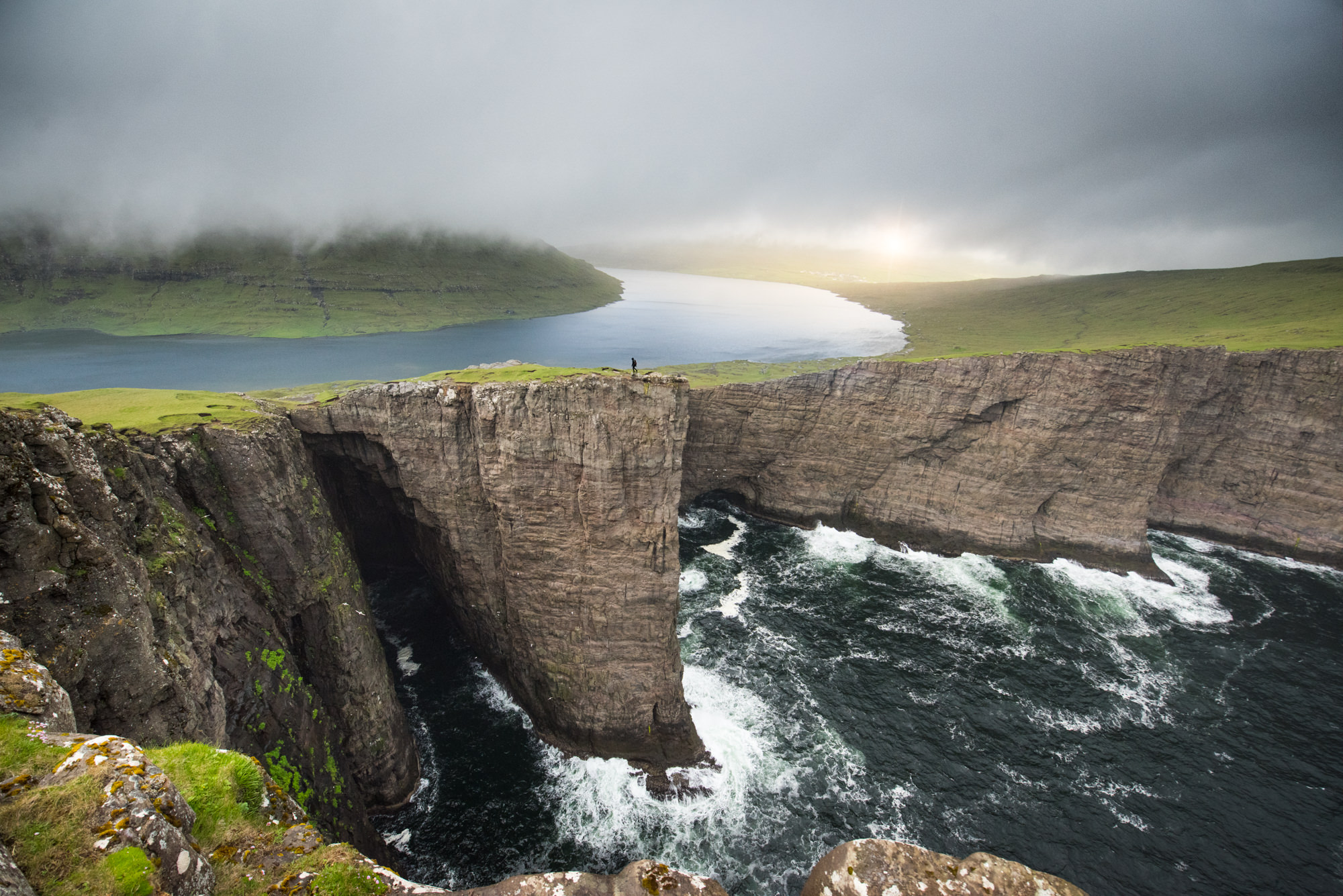 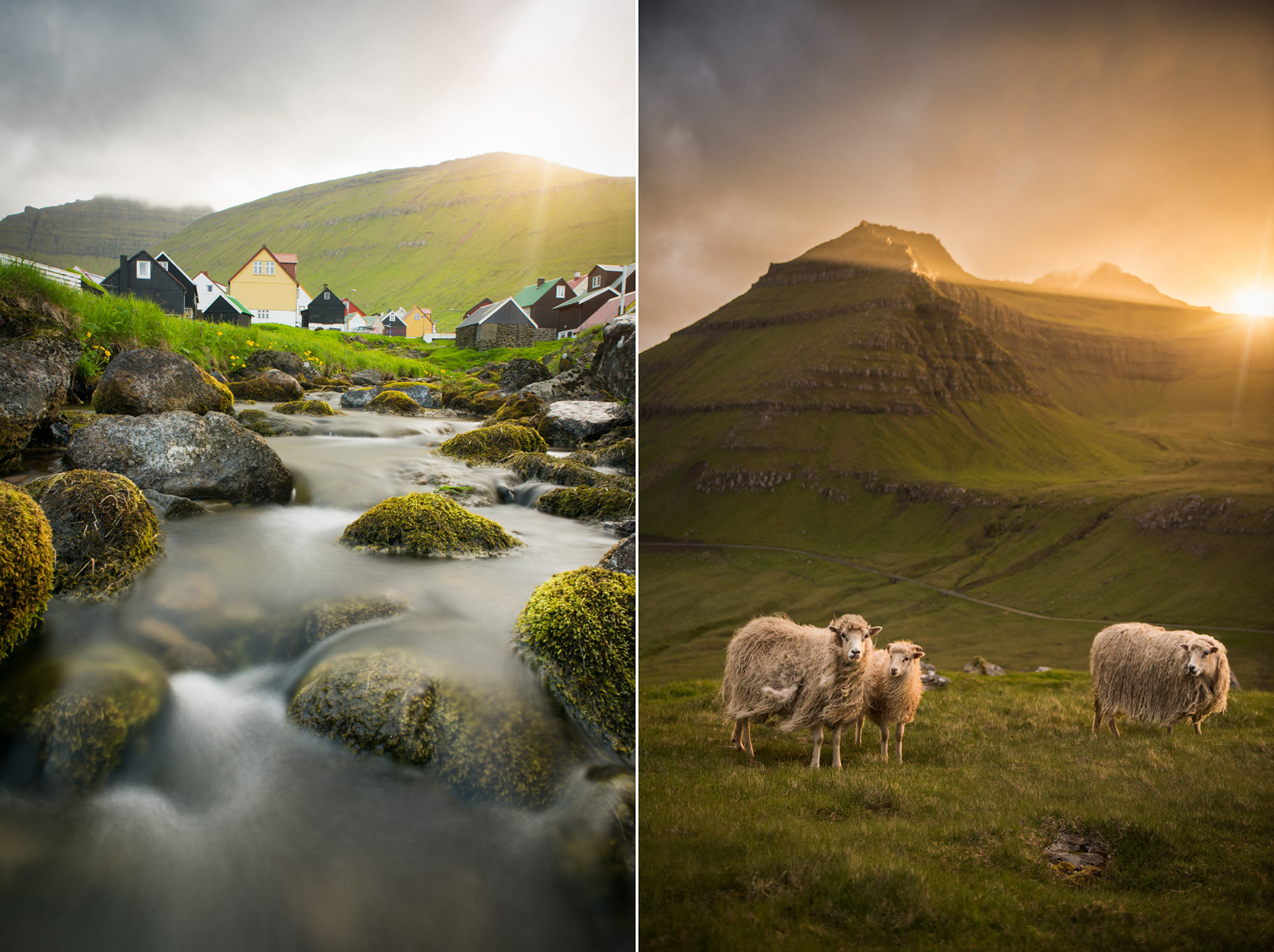 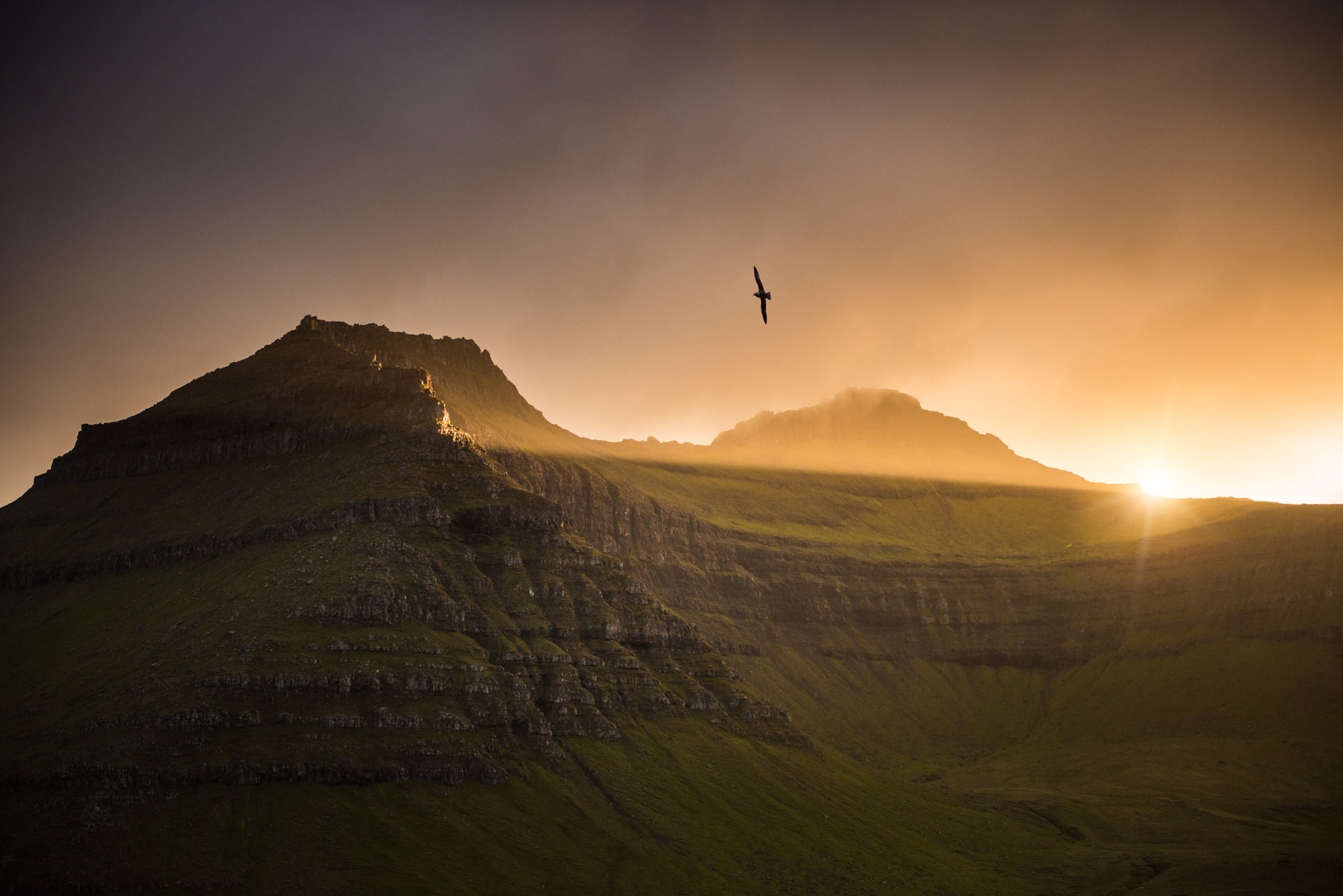 Below: Tindhólmur is one of the smallest islands in the Faroes, it rises from the ocean like a giant monolithic shark fin. The area is very often covered in low cloud like this and you can’t help but feel you are in another world. A great tip to see the islands from a different perspective is to book a helicopter trip with Atlantic Airways. Locals use the chopper to get between the islands and you can book a seat for cheaper than a 10 minute taxi ride in London. 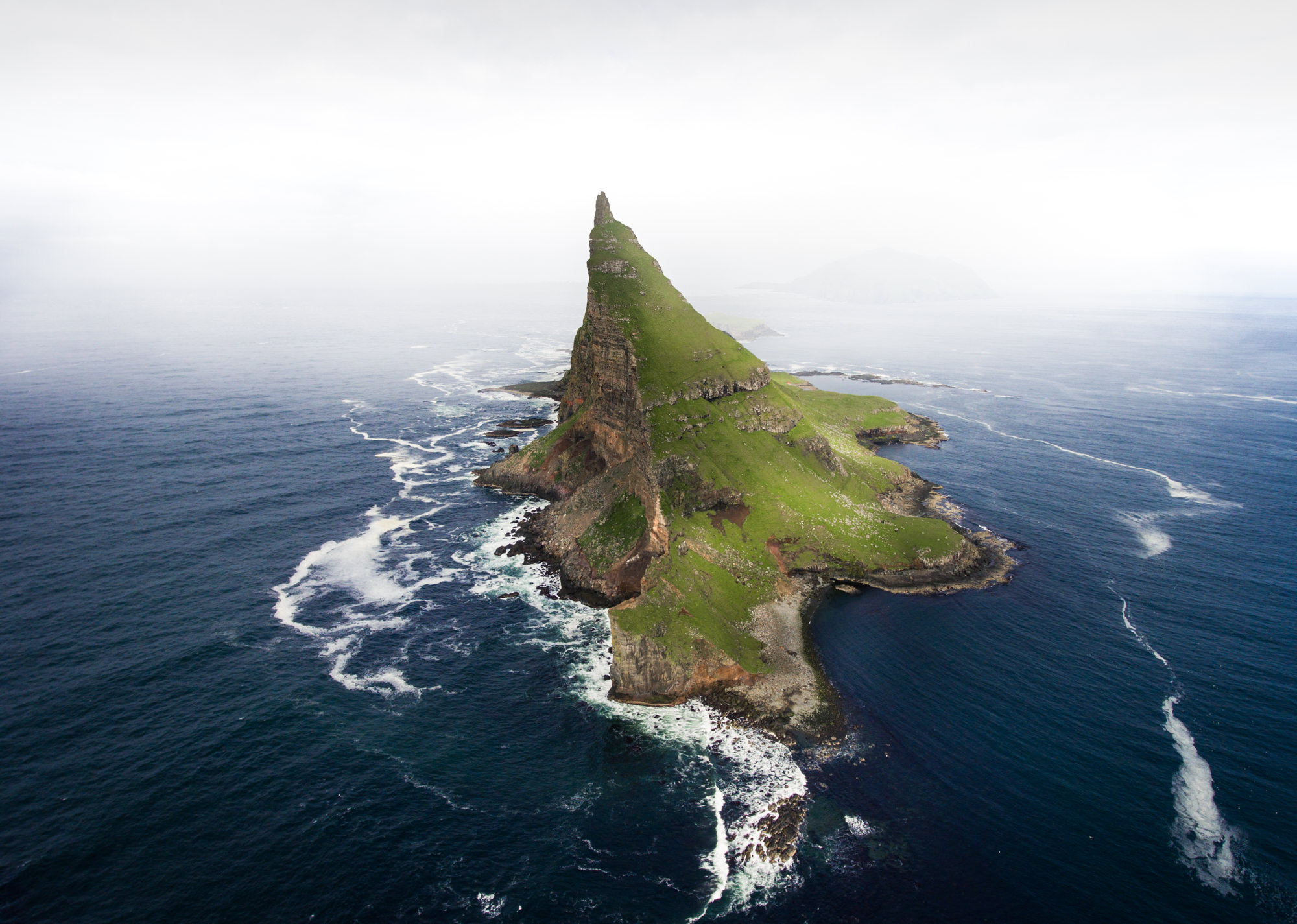 You have to be patient to photograph here. Much of our time was spent with stormy dark skies, but every now and then you will get a few minutes of the most incredible light. I spotted this starting to happen from our car whilst waiting at Gasadalur, it started to rain heavily but I jumped out and ran towards the view point. The few people who were there were running back to their car. They may have stayed dry but they missed the most magical few minutes, as golden daggers of light stabbed their way through the mist and rain onto the small town. 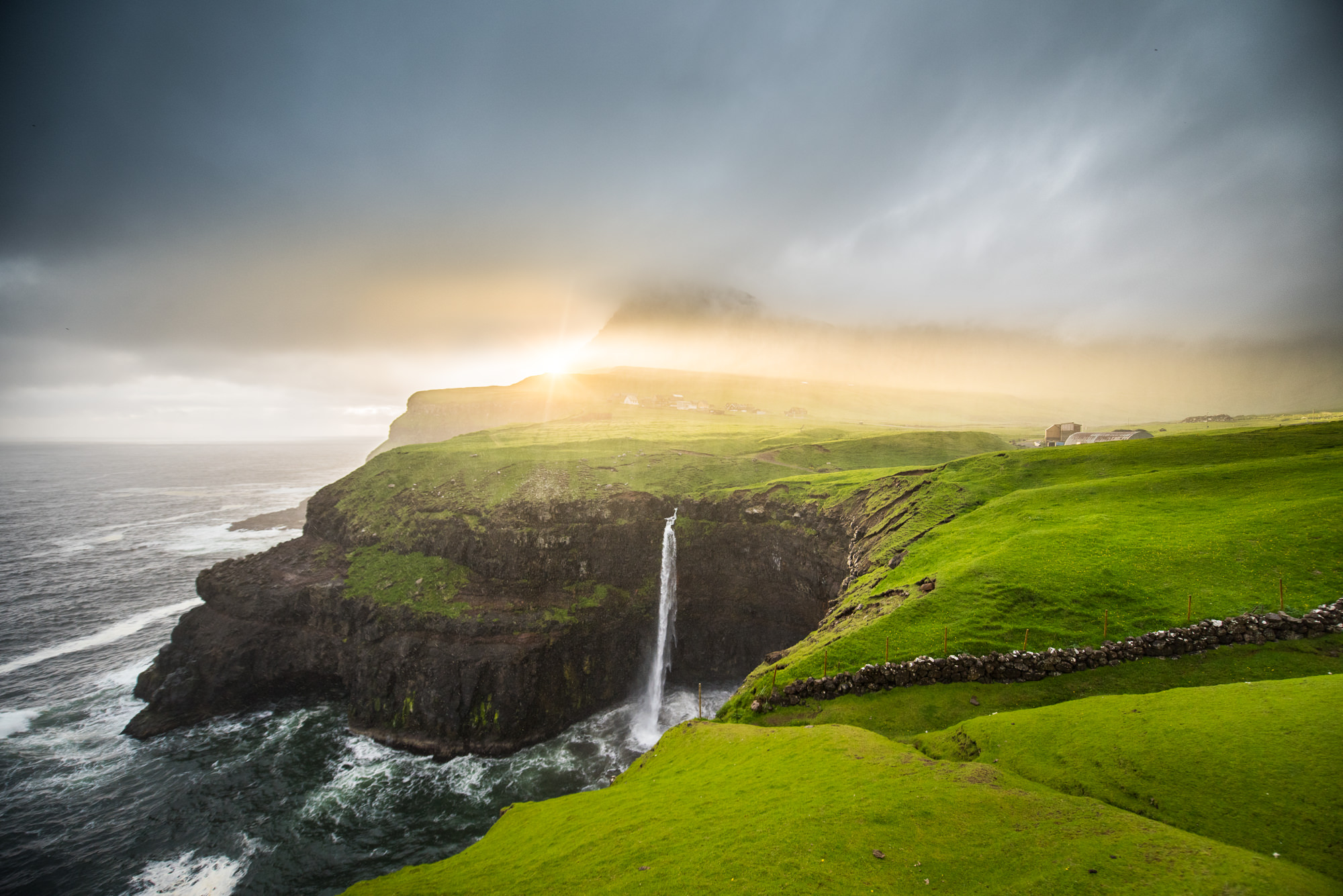 Puffins are much easier to see on boat trips as they spend their time around the cliffs and the ocean but if you are lucky you can occasionally spot them yourself on land. I saw this little guy right next to Gasadalur waterfall. They are around for all of the summer, but the actually dates depend on the weather. They spend the whole winter living at sea and they can dive down to 70 metres to hunt fish! 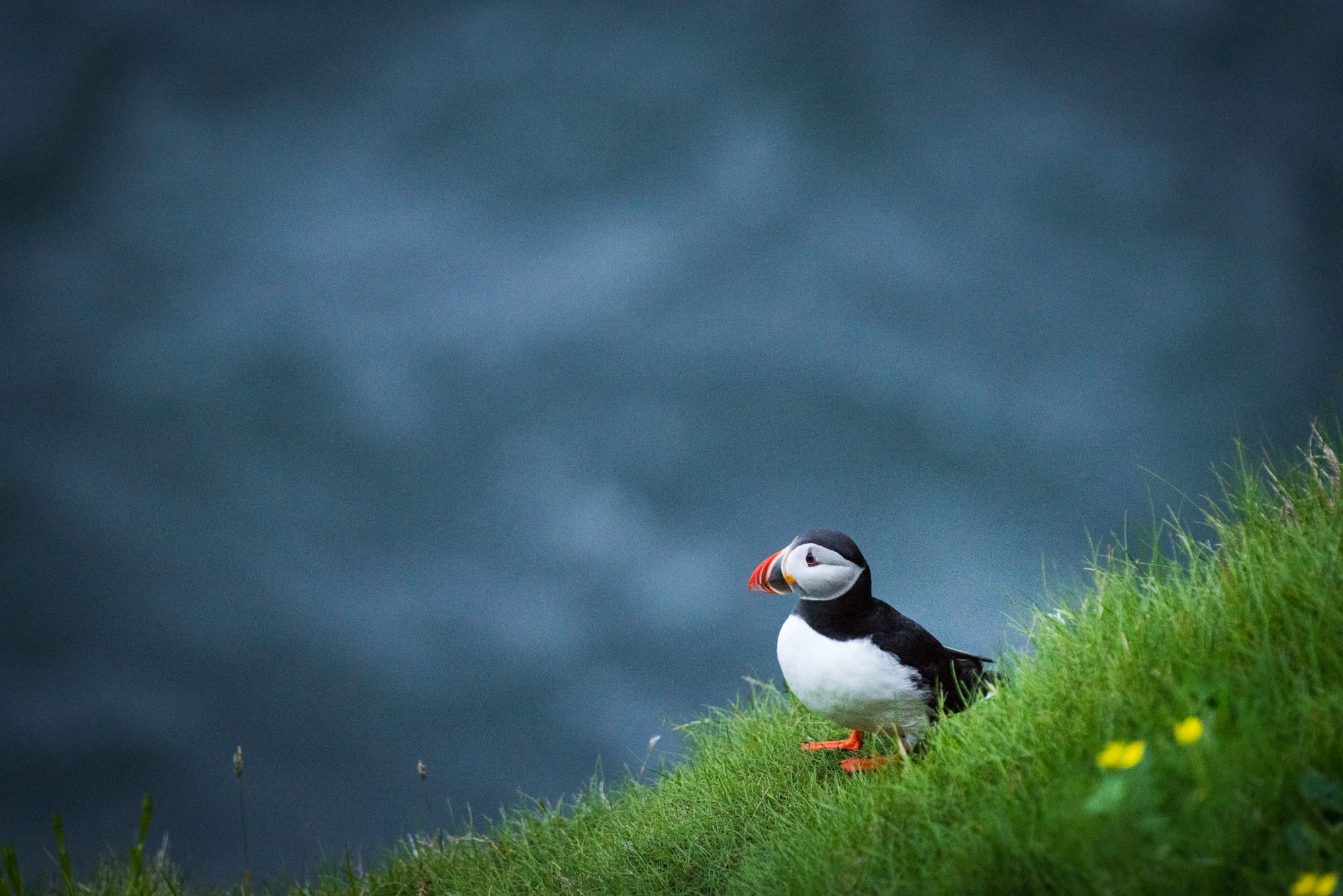 There are so many impressive spots on the Faroes that you wont find in any guides or maps. Often you just need to pull your car to the side of the road and go exploring for yourself. We found this waterfall and backdrop around 5 minutes drive out of Vestmanna. 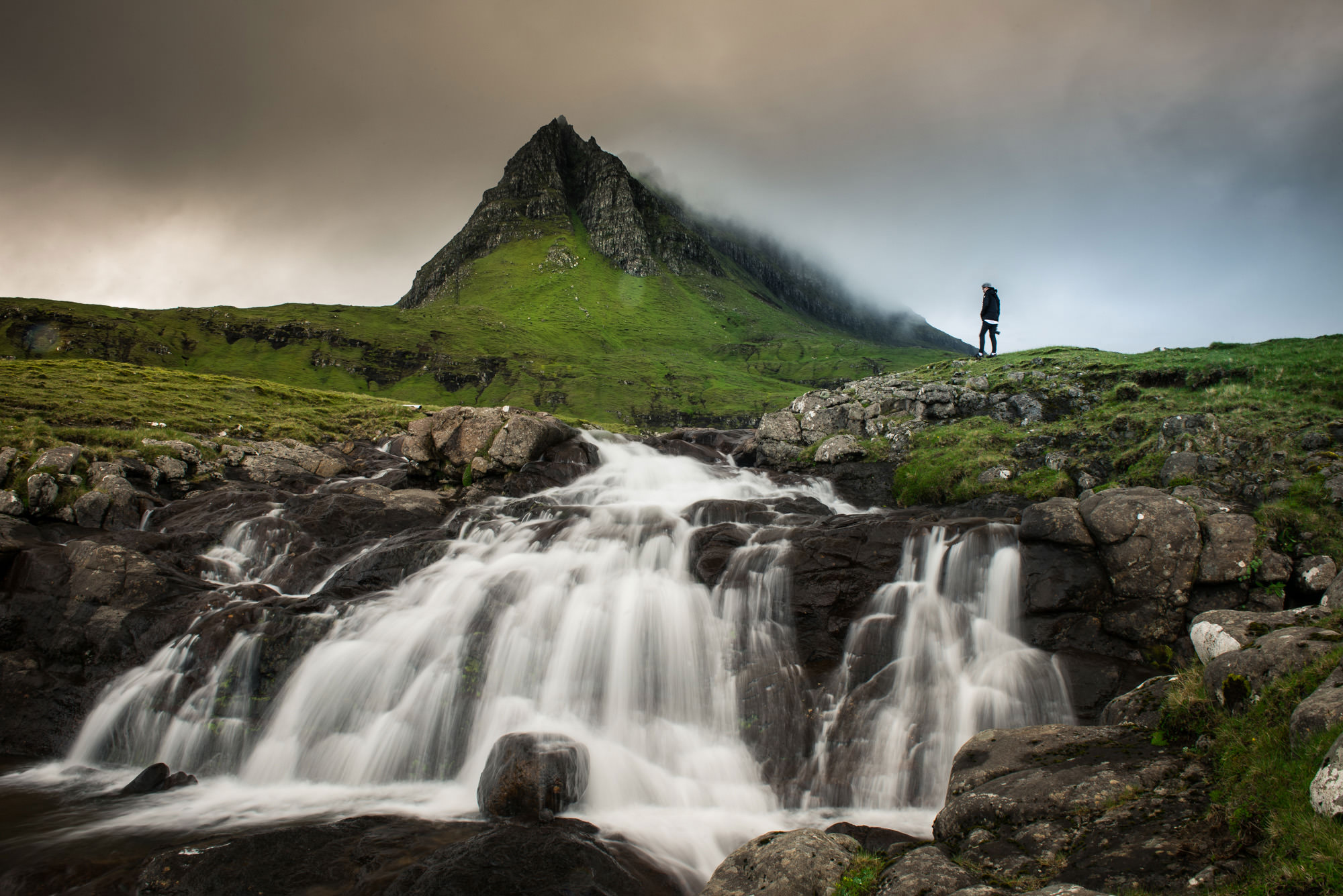 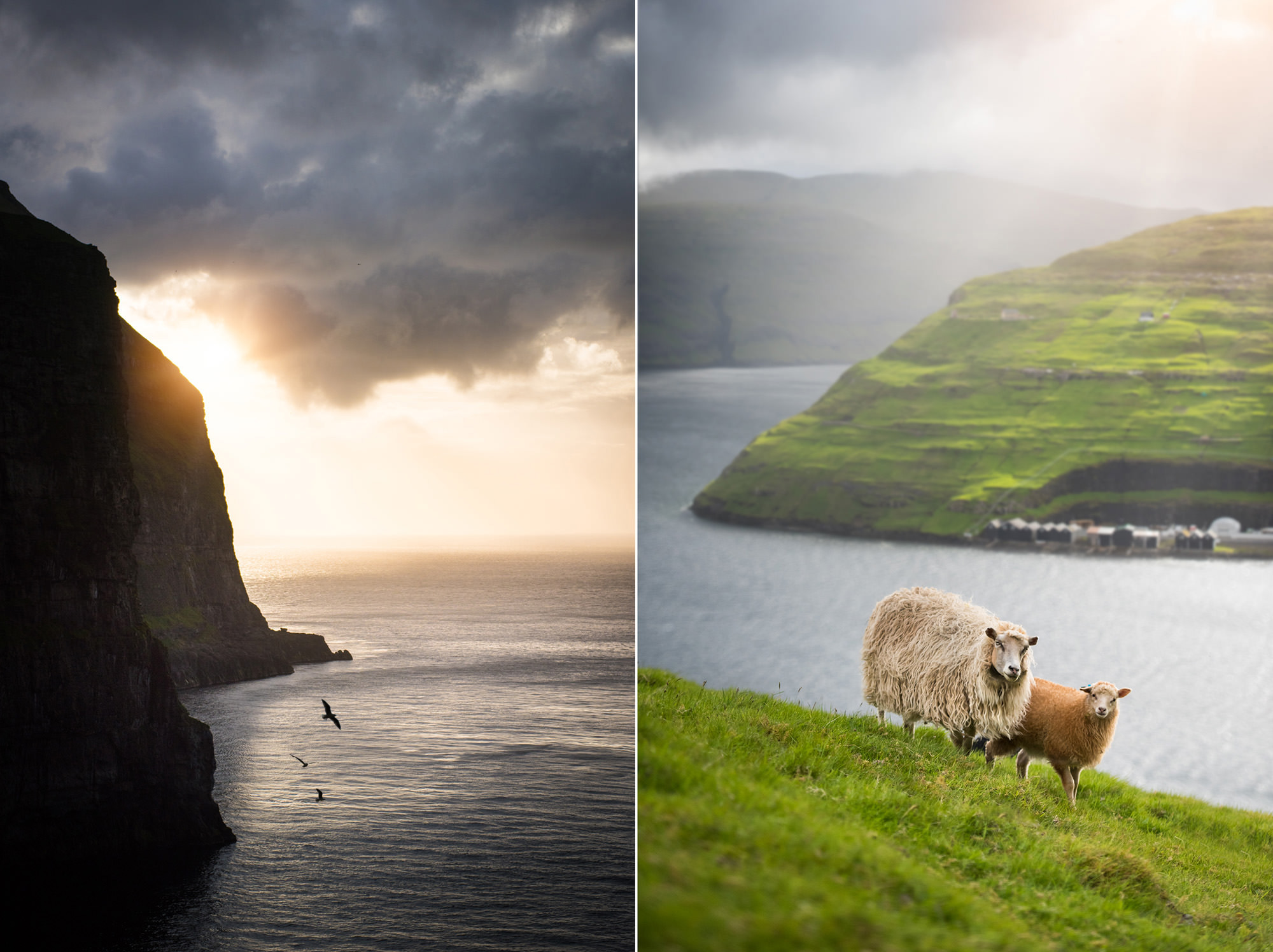 Considering there are over 70 thousand of them, the sheep are actually surprisingly shy and hard to photograph. If you want to get some good shots of them, make sure you have a telephoto lens. These guys were the only curious ones we found. This was taken near Funningur, they actually followed us around for most of our hike along the fjord. 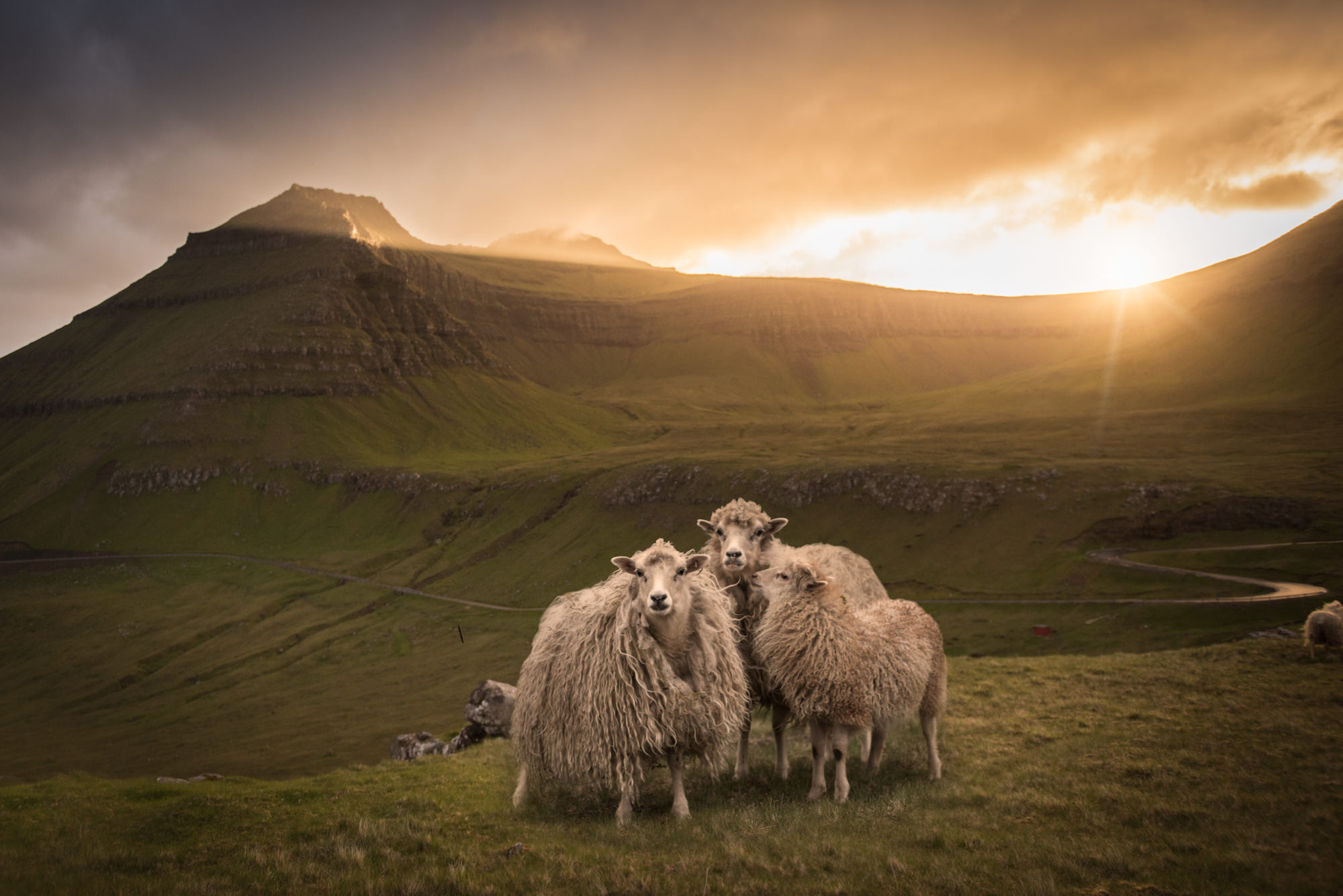 Another example of the crazily dramatic weather. This was taken just after the above shot but in the opposite direction. One side was the most beautiful golden sunset, and then opposite that the most ominous storm clouds with rain, golden light and rainbows. You can’t ask for better conditions to photograph! 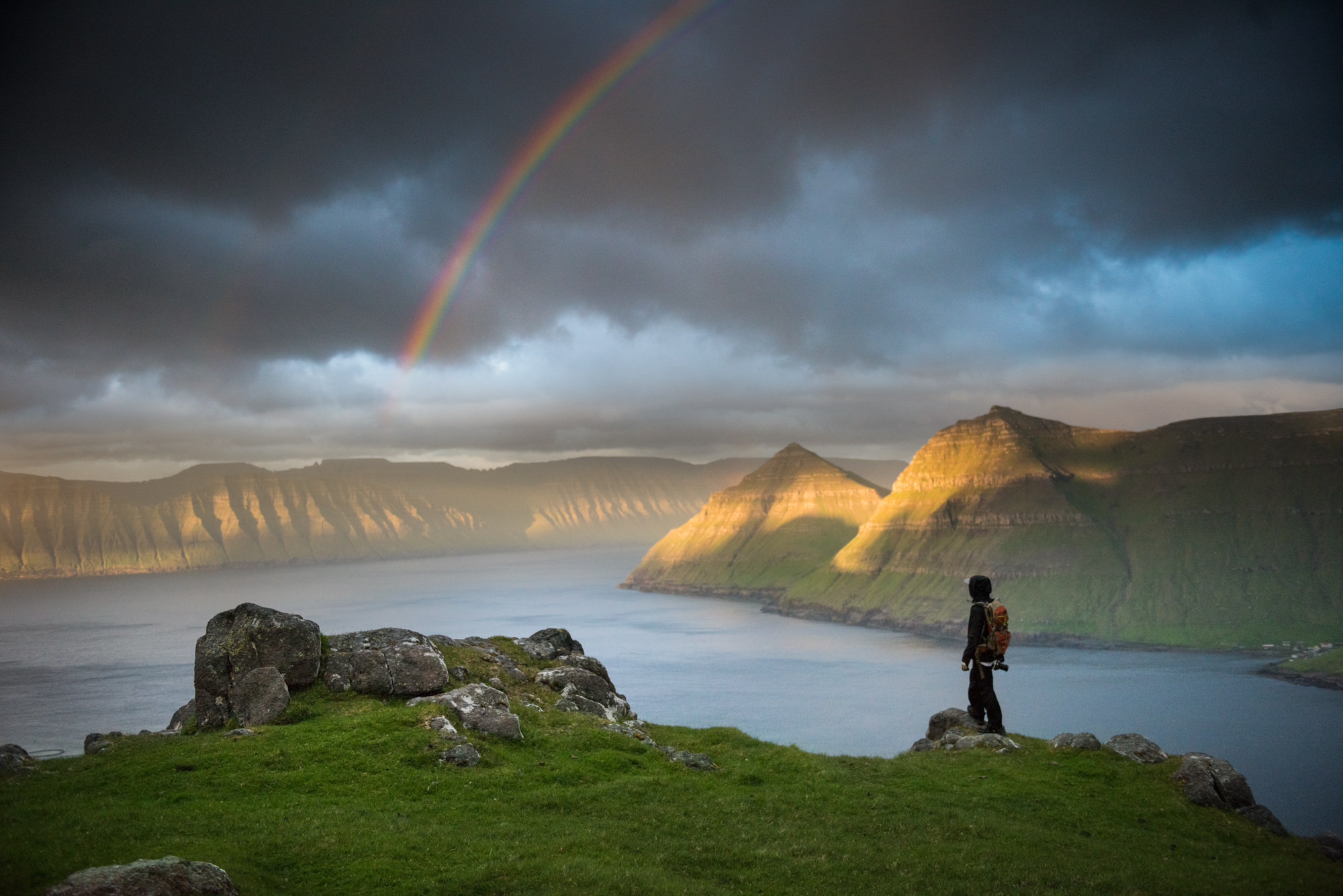 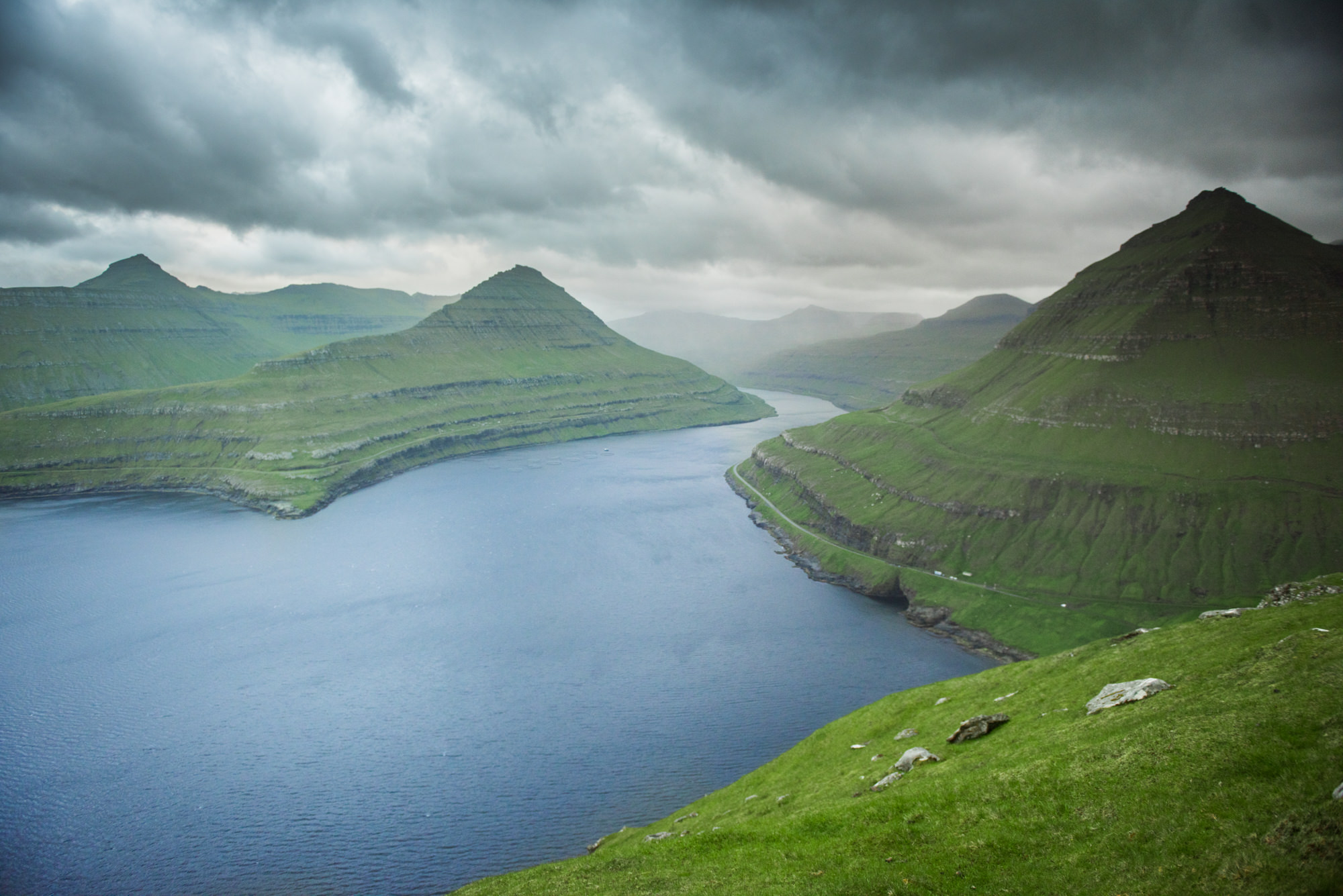 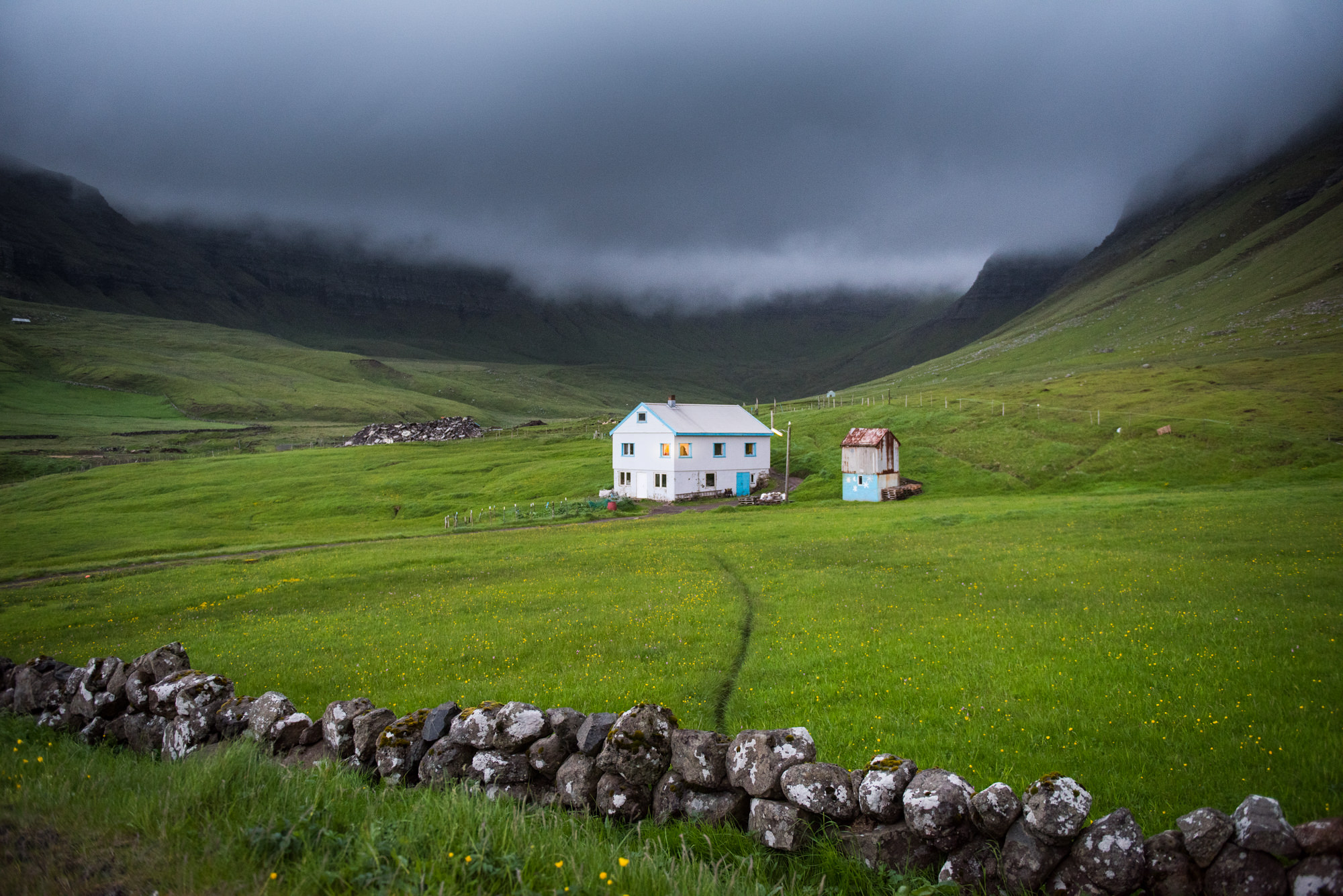 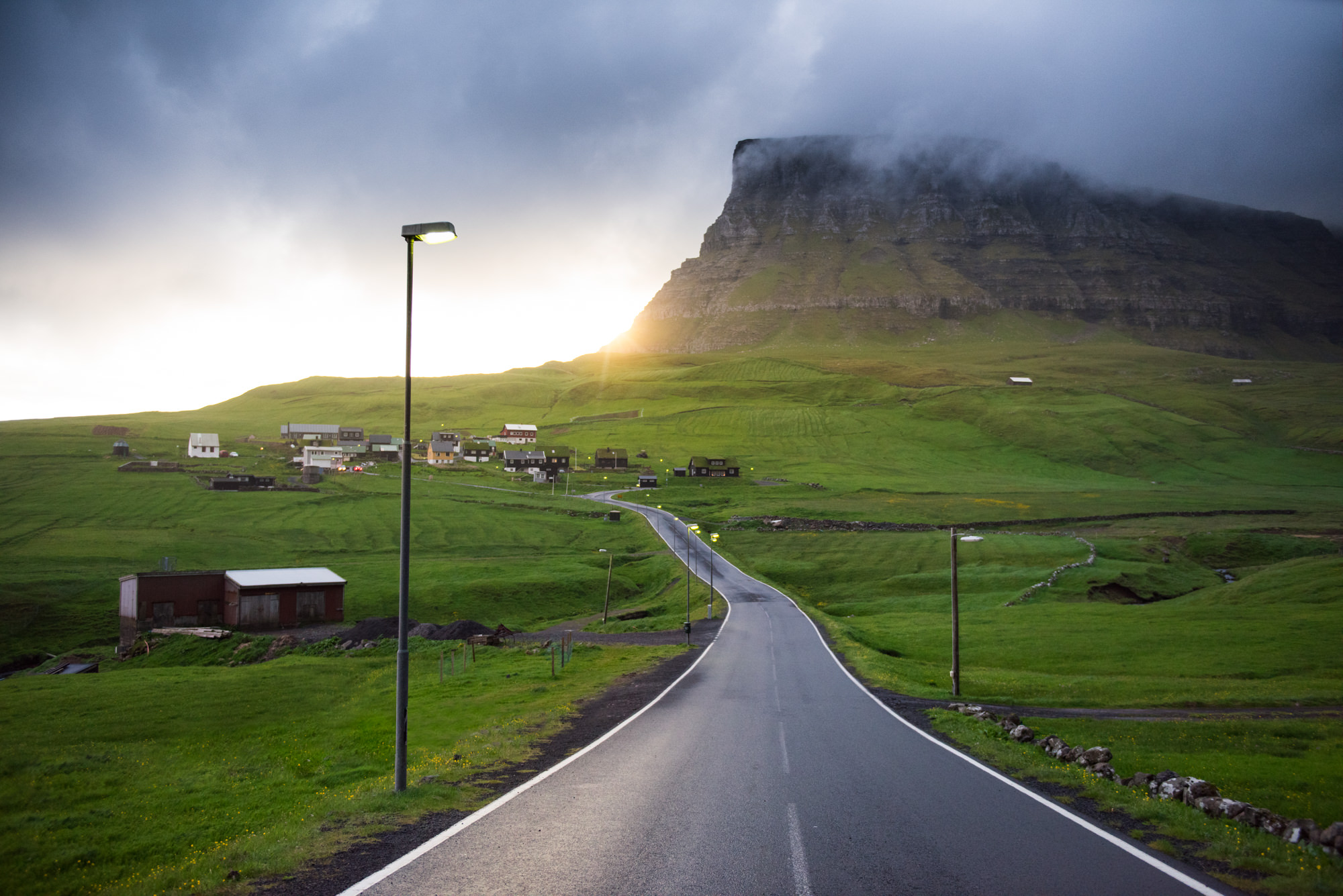 To finish off, one of my favourite shots. I took this on our last day, across the fjords late in the evening. It reminds me of the Nepali Coast in Hawaii, even though it is worlds away, it shows how varied the Faroe Islands can be.

If you have enjoyed this blog, I would love to hear from you below, any comments or questions I will be happy to answer. You can find a wealth of information on the tourist boards website – www.visitfaroeislands.com/

I can’t recommend the Faroe Islands enough, if they are on your bucket list, just make sure they are at the top, and get there before they are discovered by the masses. 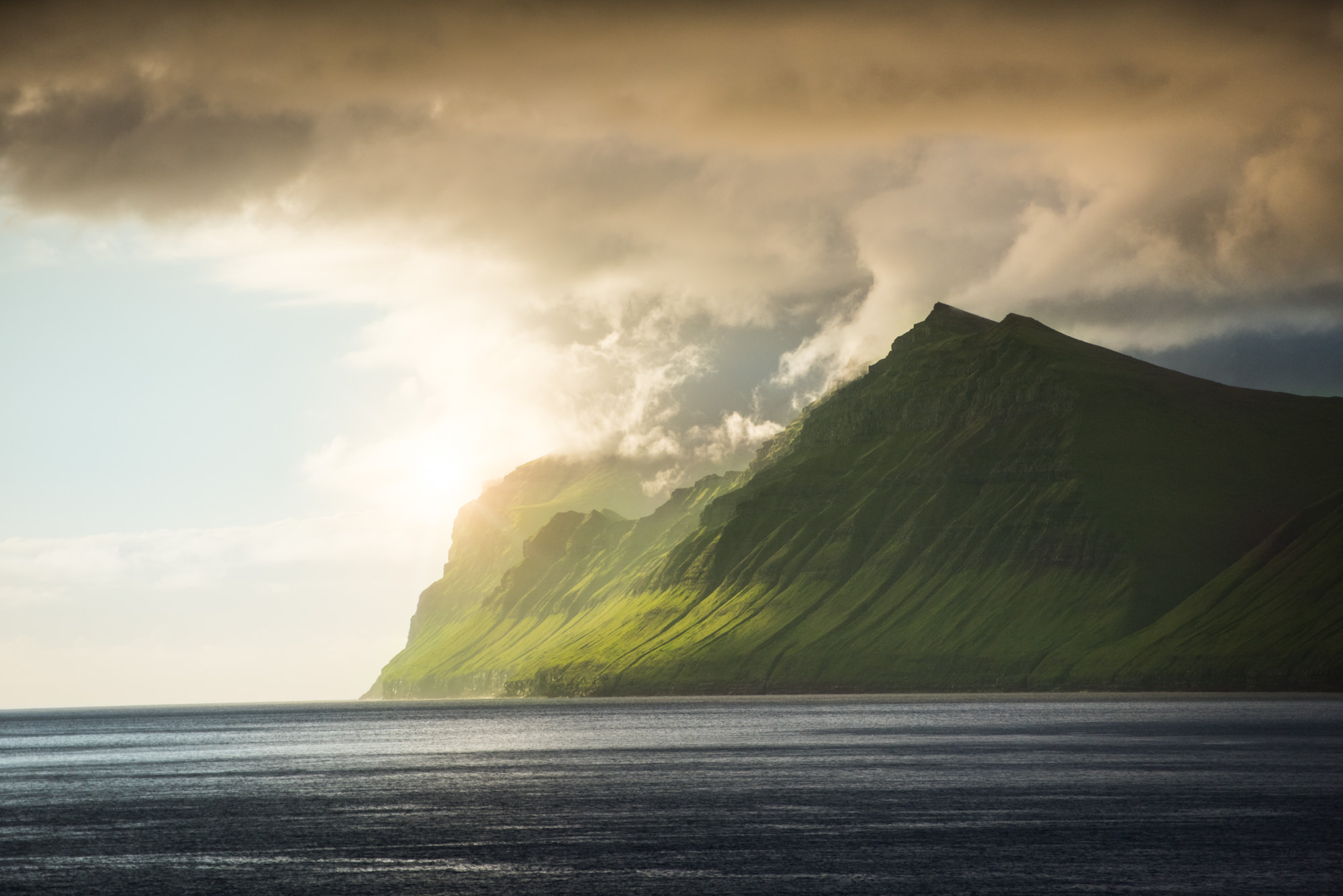 Want to visit here? Pin it to your travel board! 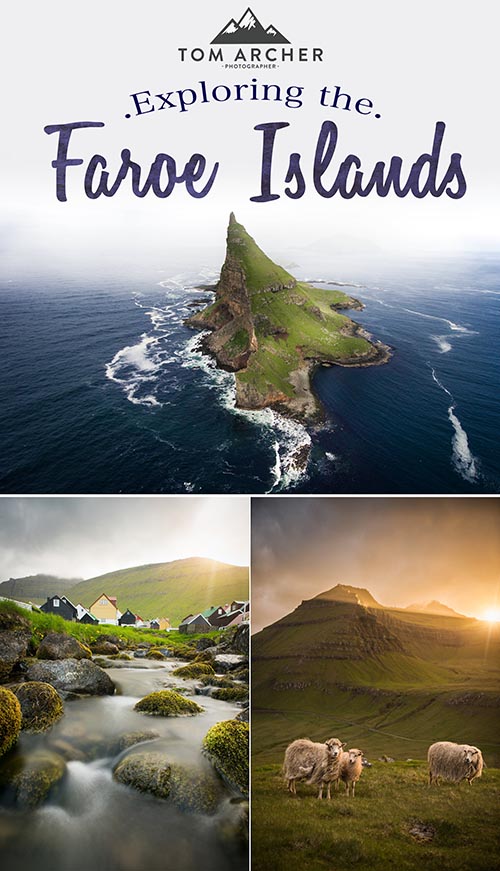 Wildlife Photography in the Serengeti, Africa

Top tips on how to photograph the Northern Lights